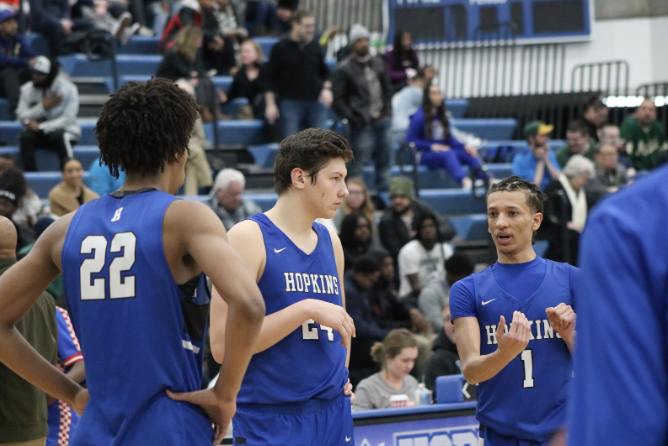 Jalen Dearring, senior, talking to Dane Zimmer, senior earlier this season. Dearring and Zimmer are both starters for the Royals.

The Royals took on the DeLaSalle Islanders on Feb. 6, and the Islanders ended the Royals six game win streak, winning by a final score of 75-67.

The Royals leading scorer was senior, Zeke Nnaji, with 26 points and a great and one dunk. The second leadings were junior, Kerwin Walton, and senior, Dane Zinner, each with 10 points.

Though the three of them combined for 46 points it wasn’t enough against DeLaSalle’s high powered offense.

Terry has been DeLaSalle’s best scorer all season, averaging over 24 points per game (PPG).

The Royals look to bounce back from this loss in a Lake Conference tilt against the fifth ranked Eagles of Eden Prairie. Eden Prairie lost to DeLaSalle in their season opener 76-66.

Eden Prairie comes in with a record of 13-5 losing games to the Park Center Pirates, the Shakopee Sabres, the Wayzata Trojans, and finally the Chet Holmgren led Minnehaha Academy Redhawks.  The uncommitted sophomore Holmgren, scored a season low, 12 points.

The Royals host the Eagles on Feb. 8 at the Lindbergh Center at 5:30 pm.