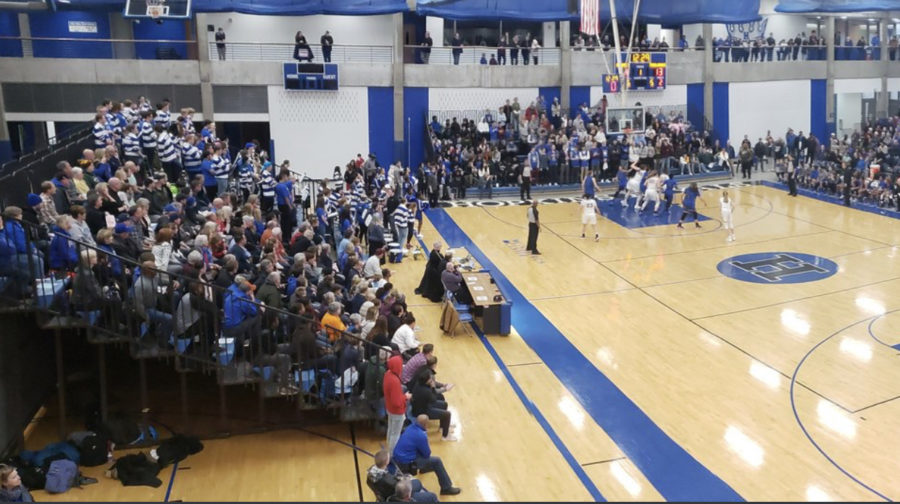 The packed Lindbegh Center on an eventful friday night. Both boys and girls beat Wayzata in highly anticipated matchups.

The Royals boys and girls basketball teams hosted the Wayzata Trojans on Feb. 1.

The boys were coming off a three game win streak after hosting Minneapolis North and defeating them with a final score of 84-66. With a win over Wayzata, they would be looking to extend that streak to five.

Hopkins was behind after the first half with Wayzata leading 43-37.  Though the Royals came out blazing in the second half scoring over 50 in the half alone to help take down the Trojans.

The leading scorer in this game for the Royals was Arizona commit Zeke Nnaji, senior, with a season high 41 point performance.  Nnaji shot 82% from the field and 86% from the freethrow line.

13 of Nnaji’s points came off of free throws in this game.

The Royals had another great performance later that night, coming from none other than the number one ranked girls basketball recruit in the nation for the class of 2020, Paige Bueckers, junior.

Bueckers and the girls team have been on a tear this season, going into this game on an undefeated 18-0 stretch. Hoping to make that 19-0, the Royals faced their toughest opponent yet.

The second ranked Wayzata Trojans, behind the Royals, were undefeated as well with a 19-0 record.

The Trojans kept the game close throughout, but Bueckers’ season high 43 point performance was just too much for Wayzata to handle.

Throughout the game, Bueckers appeared to make deep three after deep three. Her impressive performance didn’t come only from beyond the arc, it basically seemed as if she could score effortlessly from anywhere on the court.

The Trojans leading scorer in this game was sophomore, Jenna Johnson, with 21 points.

Johnson has been the Trojans leading scorer all season, averaging a team high, 16.3 PPG.

The boys team host the Minneapolis Henry Patriots on Feb. 5 at 7:00 pm.