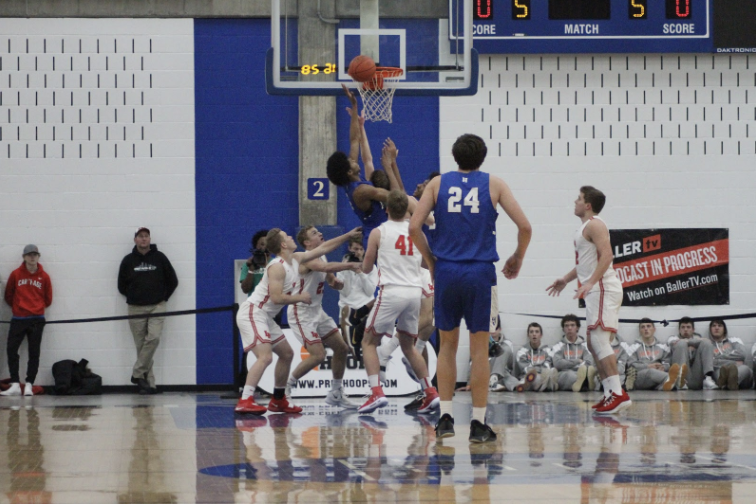 Dane Zimmer, senior, looks on as Kerwin Walton, junior, takes a layup. Walton and Zimmer are both starters for the Royals.

The Royals are on a three game win streak after winning their last two games, one against the Minnetonka Skippers on Jan. 18, and Totino-Grace on Jan. 21. Both games were away, and the Royals have not played a home game since Jan. 3.

The Royals got off to a great start against the Skippers, being ahead 44-24 after the first half behind senior, Zeke Nnaji’s 23 first point half. The Royals basically had their JV lineup in the game throughout the second half, and the game ended with a final score of 84-60.

Nnaji finished the game with 29 points which was the most in the game.  The ex-Skippers, seniors, Jalen Dearring and Andy Stafford, combined for 21 points.

The Royals took on the Totino-Grace Eagles three days later.  After the first half, the Royals were off to a 29 point lead and never turned back.  With a final score of 79-42, the Royals officially started another win streak.

The Royals play their first home give in over three weeks on tonight, taking on Minneapolis North.

The Polars are currently 11-4 and are 5-0 in their conference, Minneapolis North’s leading scorer is Eli Campbell, senior, with 17.1 points per game (PPG).

Campbell’s season high in scorer came in their season opener against St. Paul Como Park in which he scored 26 points.

The Royals host the Polars tonight, at the Lindbergh Center at 7:00 pm.