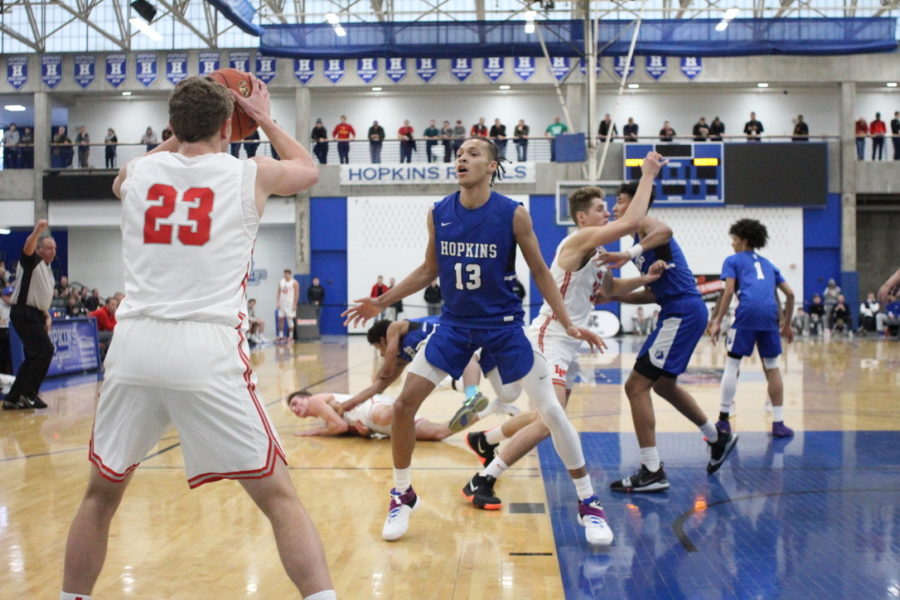 Rayquan Valentin, senior, plays defense against the Lakeville North Panthers during the Tip-Off Classic. Valentin is averaging four assists per game this year.

The Royals boys basketball team has gotten off to a red hot start.  After losing the first game of the season to East Ridge, the Royals are on a three game win streak. Defeating the Minnehaha Academy Redhawks on Dec. 11.

With five-star point guard, Jalen Suggs, junior, leading the Redhawks to a 3-0 start, the Royals ended their undefeated start to the year.

Suggs did all he could to keep the game close, scoring 25 points, and sophomore, Trent Finney scored 18 points. A combined 43 points from two of the top three scorers on the Redhawks wasn’t good enough to takedown the Royals.

Many credited Stafford with his effort on the defensive end while he was guarding Suggs as he shot 4-19 from the field.

The Redhawks were outscored by the Royals in both the first and second half.  After winning both periods during this game, the Royals finished the game winning 66-59.

The Royals next opponent are the Robbinsdale Cooper Hawks.  Robbinsdale is currently 1-1 after taking a three point loss to St. Thomas at the Tip-Off Classic on Dec. 8.