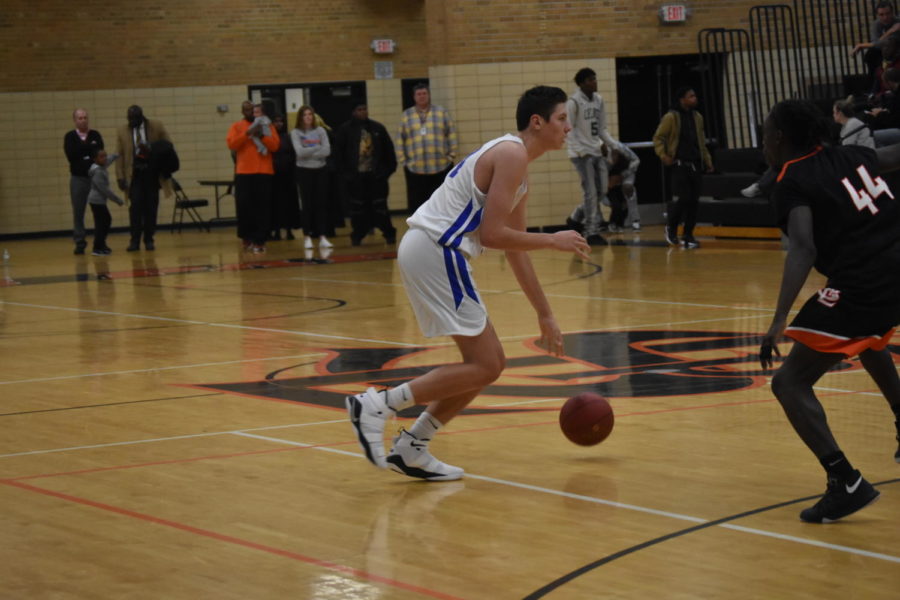 Dane Zimmer, senior, faces up against an Eden Prairie big man in a game last year. Zimmer is a starter for this year's royals.

The Hopkins Royals hosted the Tip-Off Classic tournament on Dec. 8.  The Royals took on the Lakeville North Panthers on the main court in the Lindbergh Center.

After a blowout victory earlier that week against Orono, the Royals took that momentum into this tournament.

Through the first three games of the season, Zeke Nnaji, senior, has been on fire.  Averaging over 25 points per game (PPG).

The Royals and the Redhawks had a very close game all throughout.  At half time, Lakeville was defeating Hopkins by two points. The Royals outscored the Panthers by eight points in the second half to secure the victory.

Behind Andy Stafford, senior, and Kerwin Walton, junior, both scoring over 15 points, the Royals defeated the Panthers by six points with a final score of 78-72.

One thing that the Royals have been doing great is shooting the ball very efficiently, Stafford sees that along with great rebounding.

“We shot the ball really well and we played patient but aggressive on offense, and also I feel we rebounded well, Dane [Zimmer, senior], in particular,” Stafford said.

Stafford has been seeing some great selflessness over the first few games.

After these back to back victories, the Royals take on the Minnehaha Redhawks tonight at Minnehaha Academy at 7:00 pm.

Leading the Panthers is five-star, number one ranked junior, point guard, Jalen Suggs.  Leading Minnehaha to a 3-0 start, and averaging 27 PPG, Suggs is an absolute star.

“Our goal as far as defense on Jalen is to stay very energetic and make him take tough shots,” Stafford said. “He’s gonna take enough shots to make at least a few, but we want to make everything hard for him.”