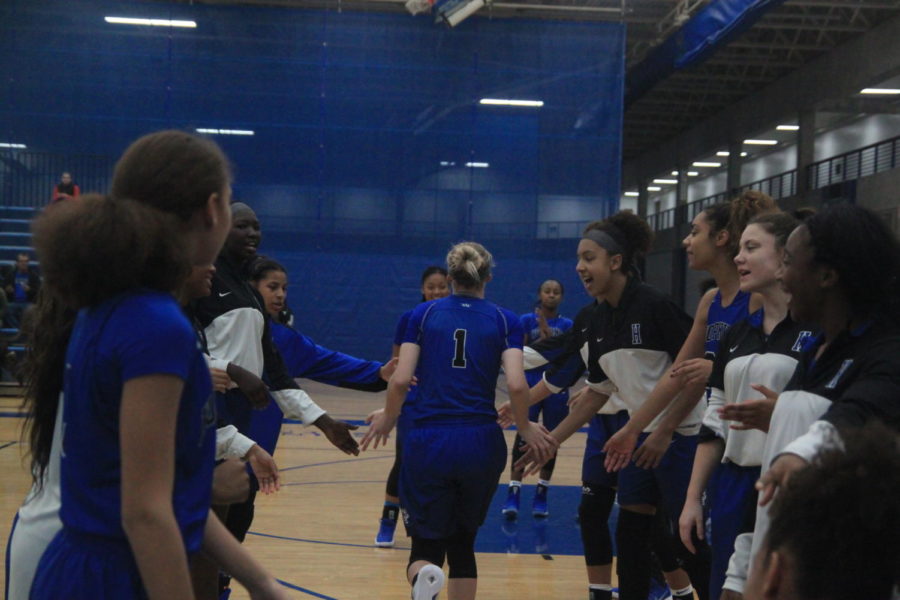 Paige Bueckers, junior, gets announced in the starting lineup in a game last year. Bueckers led the team in scoring last year.

Over the past few years, the Hopkins Royals and Eastview Lightning have been the Red Sox-Yankees of Minnesota girls basketball.

The two teams have consistently been among the top teams in Class 4A and have clashed in multiple high stakes games. Going into the 2017-2018 season, the Royals knocked Eastview out of the state tournament in three consecutive seasons, with two victories in the semifinals and a 2015 state title triumph.

However, the tides turned during the 2017-2018 campaign. Eastview headed into the state tourney with an undefeated record that touted a two-game sweep of Hopkins in the regular season. The Royals had an opportunity to erase those regular season defeats in the state championship game, but dropped a back-and-forth affair by a score of 68-63.

The loss capped a trifecta of runner-up medals for Hopkins. That fact does not sit well with Dlayla Chakolis, senior.

“We’re coming in with absolutely no mercy, and we’re trying to redeem ourselves because they took our ring last year and that’s a real personal thing for me and my teammates,” said Chakolis.

The No. 1 ranked Royals enter this game as expected for the best team in Minnesota; undefeated (3-0) with all of their wins coming by a margin of more than 20 points.

“We feel like we’re ahead of the curve. We’ve been preparing for the season over the summer and during fall league, but we’ve still got to work hard if we want to win a lot of games,” said Chakolis

While this game did not have the state tourney stipulations attached to it, the Royals got some of their wind back from last season by handily defeating the defending champions by a score of 75-48.

The first few minutes featured the back and forth action one would expect from a bout between two top five teams in the state. The team traded buckets until Eastview grabbed an 11-10 lead early.

That would be the last time that the Lightning would have the upper hand in the matchup. Paige Bueckers, junior, and Kayhla Adams, junior, sparked a 25-6 run midway through the first half to give them a solid 40-24 advantage going to the locker room at halftime.

While the offense was on full display for Hopkins, their defensive performance was excellent as well. Hopkins used a full court press throughout the duration of the game and made ball movement extremely difficult by tipping passes that came in their direction. Amaya Battle, freshman, locked up Eastview’s perimeter by switching off screens with ease and not allowing her opponent to drive the lane.

Speaking of which, the lane impenetrable while Eastview was in their half-court offense. They relied on their mid-range and outside shooting as well as their trips to the charity to muster their 24 first half points.

Hopkins ran their offense through Bueckers, who finished with 25 points, but also received important contributions from the rest of the starting five. Two other starters, Battle and Chakolis, broke into double figures in the scoring column.

Following this game, the Royals have two games against Tartan and St. Louis Park before they hit the road and head to Sioux Falls, SD.

“We went there last year and we won all of our games against some good teams. It’s a good bonding experience and it should be fun again this year,” said Chakolis.