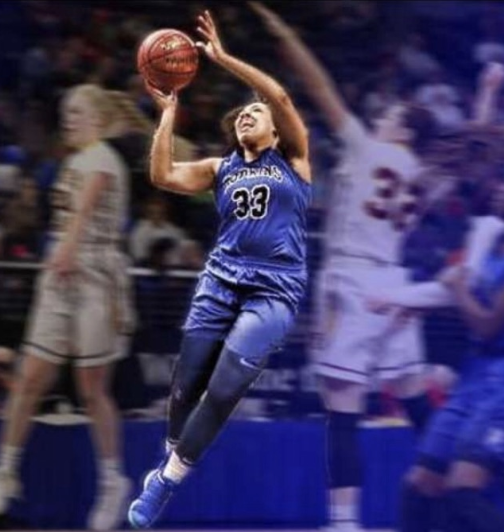 Dlayla Chakolis, senior, going up for a layup. Chakolis was named a captain for this season.

Dlayla Chakolis, senior, has been waiting for this moment for awhile now, her senior basketball season.

Chakolis, who is committed Hampton University to play Division 1 basketball, feels as if there is still work to be done throughout her Hopkins career.

“I am really looking forward to this year. We feel as if we have something to prove coming into the season,” Chakolis said. “The sky’s the limit for this team, we believe we could pull off not only and undefeated season, but winning the state championship as well.”

Chakolis and the Royals came up just short last season, falling in the state championship game to Eastview in a game that the Royals thought they had won. The Royals, including Chakolis, believe this year will be different.

“The group of girls coming up looking to play varsity this year give us tons of energy and overall give us energy to play and compete,” Chakolis said.

Named captain at the beginning of the year, Chakolis is taking that leadership role to heart, as she feels that is is her responsibility to keep the team going, as it is her senior year.

“It is a different type of culture here this year. Us captains are doing a great job leading the younger players, and teaching them the ways of varsity basketball,” Chakolis said.

Chakolis and the Royals are looking to open up their season against Lakeville South, November 23rd, at 8:15 pm.