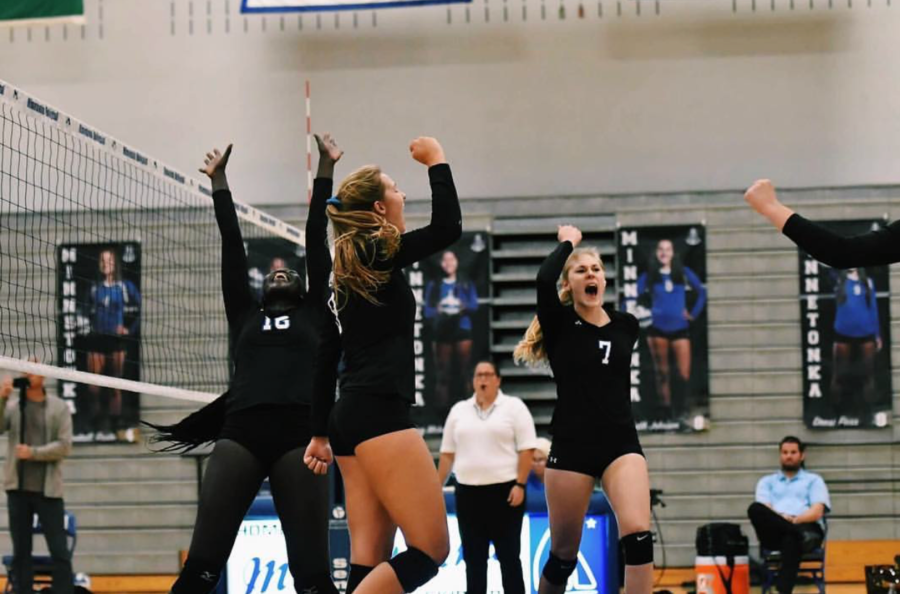 Anna Erickson, senior, celebrates a point with her team. Erickson is committed to Central Michigan?

Anna Erickson, senior and captain of the HHS volleyball team, has experienced a season unlike any of her others here at HHS.

“This year has taught me to never give up on a team or a teammate. Anything can happen if we really work hard in practice,” Erickson said.

In the past, the HHS volleyball team has always been very successful. This season, the team looks very different than past seasons. Still, the team found lots of success this year and there is no question these ladies worked hard for it.

“Being the number 7 seed  and winning against the 2 seed was a huge upset. Everyone played so hard and it was so fun for me to watch the team succeed,” Erickson said.

Reflecting on the season as a whole, Erickson is proud of what they’ve done this season.

“Even though we ended the season earlier than we thought I am so proud of the team and what we have accomplished,” Erickson said. “Looking back to the beginning I honestly wouldn’t have thought we’d make it as far as we did.”

As Erickson’s volleyball career comes to an end at HHS she had a lot to say about what she has learned throughout her years.

“Being a senior captain felt really special. I felt the teamed looked up to me as a leader on and off the court. I just wanted the best for my steam the whole season and I am very proud of what we accomplished,” Erickson said.