Students sit-in to stand up for sexual assault survivors 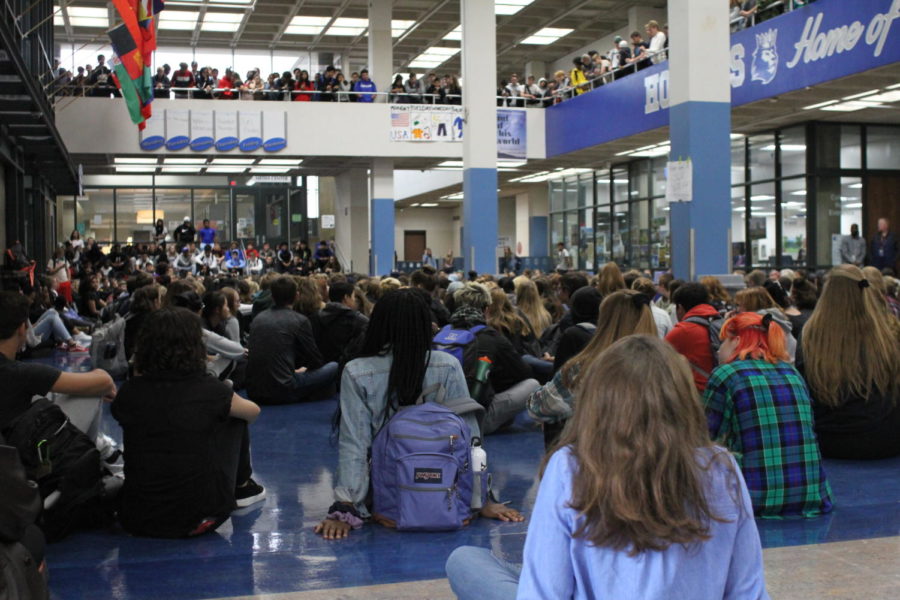 HHS students sitting in the mall holding a moment of silence for sexual assault victims.

On Thursday, September 27th, 2018, many HHS students gathered in the mall at approximately ten in the morning to recognize survivors of sexual assault and the issues surrounding it.

The inspiration for this sit-in was the Believe Survivors movement, first brought to national attention by various women’s rights groups in support of Dr. Christine Blasey Ford. Blasey Ford is a psychology professor in California, most commonly known for accusing Supreme Court nominee Brett Kavanaugh of attempted rape. Since her statement, several other women have come forward with their experiences of Kavanaugh making unwanted sexual advances.

“Dr. Christine Blasey Ford has bravely come forward and shared her story about her sexual assault at the hands of Supreme Court nominee Brett Kavanaugh,” says the Facebook event page for the protest. “Even though Dr. Blasey Ford has repeatedly stated her desire to testify and bravely share her story, Senate Republicans are doing everything they can to shame, bully, and force her to testify under their unacceptable, inappropriate conditions.”

In solidarity, the HHS sit-in was organized by students and publicized through support on social media over the course of the week.

The goal of the sit-in, according to organizer Jessica Melnik, senior, was to have three minutes of silence in solidarity for the victims whose voices have been silenced and for students to see how common assault is, even within our school. By holding the protest inside, she hoped to make the message harder to ignore.

“Our nation’s most important leaders tell us that as high schoolers our experiences aren’t important, and that they don’t matter. We need to band together and fight that. If we say nothing about it, or if the school says nothing about it, then that sets a terrible example,” Melnik said.

While the Believe Survivors has received acclaim, there has been criticism. Gideon Ross, senior, feels that this message does not promote progress.

“The motto ‘Believe Survivors’ is problematic. Americans need to hold strong to the ideal that we are innocent until proven guilty because the alternatives could be extremely dangerous. ‘Believe Survivors’ doesn’t seem to uphold this principle,” Ross said.

The National Sexual Violence Resource Center states that the majority of sexual assaults go unreported and of those that are, false accusations make up ten percent or less of them. As the Centers for Disease Control and Prevention states, victims of sexual assault suffer from great harm. Survivors are vulnerable to many issues, including PTSD and a higher rate of suicide.

While this protest was not officially recognized by the school’s administration in any way, the Royal Page reached out to Doug Bullinger, principal, who expressed support.

“We approve and applaud it. Our job is to make sure everyone is safe and it’s done in a way that is conducive and helpful for their cause,” Bullinger said.

Lola Brown, senior, who participated in the sit-in hopes this protest serves a reminder that teens deserve to have a place in the #metoo movement.

“I think the protest is very important because Ford is being attacked for saying that she was assaulted in high school,” Brown said. “As high school students, we can’t pretend that this has nothing to do with us.”