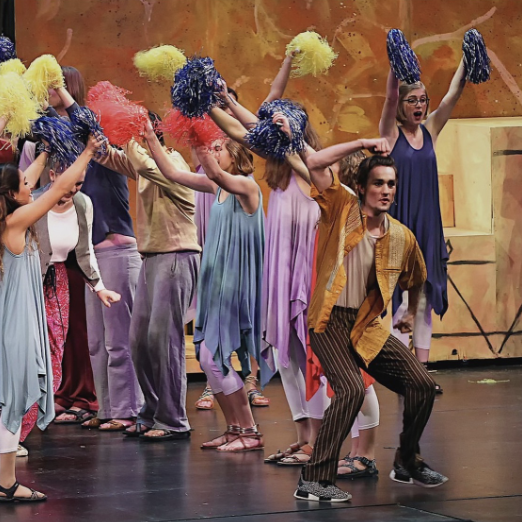 Gabe Kemper, senior, has always been a performer. Kemper has loved being at the center of attention ever since being in his church choir at a young age.

“I found my love for acting in my fourth grade rendition of the Revolutionary War. It was the first time I was given a leading role in a performance and it was a lot of fun,” Kemper said.

After this experience, Kemper would perform in any play his school, then Gatewood Elementary, had to offer. In fifth grade Kemper joined band, which was where he learned to read music and play the tuba.

Eventually, Kemper would leave band after five years to join the school choir, something he had been interested in ever since being a part of his church choir. His choir class is where Kemper began to show an interest in being a part of theater and has been in four shows since.

“I don’t think I had any influences in joining theater as I always wanted to do it. I enjoy the rush that comes from acting and theater was a way I could do that while surrounded by friends,” Kemper said.

Kemper does note that theater can be stressful, especially as he gets closer to a performance. He feels that knowing you could forget a line or mess up choreography is specifically intimidating, but also part of what makes theater special.

Juggling family, work, and sports, as well as theater, has proven itself to be a challenge for Kemper. Since many of these things conflict in his schedule, he has had to make certain sacrifices, such as taking a break from work.

Kemper’s role in the Fall musical “Damn Yankees” is Old Joe Boyd. “Damn Yankees” will be performed Nov. 15, 16, and the 17. Gabe plans on doing One Acts again in the Winter, and hopes to continue acting in his college years and beyond.