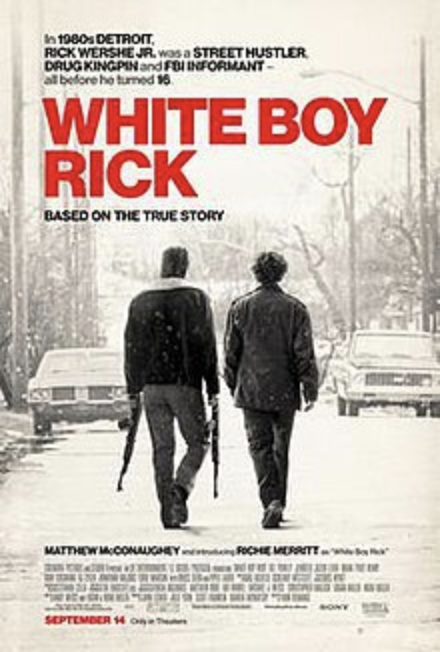 White Boy Rick is a true story about the childhood of Rick Wershe Jr., and how he became the youngest FBI informant and Michigan’s longest nonviolent offender at age 14.

Rick Sr. is a loving father trying his best to parent two kids after his wife left them. Rick Sr. wants to open a movie store with his son and make something of themselves in America.

However, in order to accomplish his goal, he sells guns and silencers on the blackmarket. He primarily sells AKs with attached silencers to various gangs in Detroit.

The FBI becomes interested in this and uses it to convince Rick Jr. to work with them. In order to keep his dad out of jail, Rick Jr. buys drugs in order to help the FBI track down the supplier.

Things take a turn when the FBI asks Rick Jr. to start selling drugs on his own and act as an insider to the gangs of Detroit. Betrayal, poverty, corruption, and capitalism are all prominent themes in the movie. The FBI turns their back on Rick when he’s caught as a dealer and refuses to acknowledge they played a part in Rick Jr.’s criminal upbringing.

While the movie is full of excitement and adrenaline rushes, there are parts of the movie that are noticeably slow. The cinematography is able to capture the varying moods throughout the film which is respectable.

I really enjoyed the film for these reasons. However, it could have done a better job of keeping the attention of the audience.