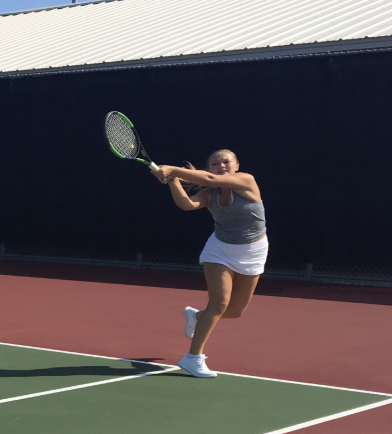 Mary Murphy, junior, returns a backhand. Murphy is a part of the Girls varsity tennis team.

With a team poised for success this season, Mary Murphy, junior, knows that she has to give it her all this season while keeping chemistry with her doubles partner.

Murphy is apart of a duo that is Amaya Wolpert, senior, and herself being the number one doubles team on the varsity girls’ tennis team.

“Individually the season has been good, I’ve learned more and more about doubles every match,” Murphy said. “I think for me individually it is just a matter of confidence and making sure I compete my best every match, but overall I think me and Amaya have improved a lot since last season both skill wise and just level of play.”

Murphy and her team also have a lot of hopes for the season. “With Edina in our section who is ranked number one in the state, it is always hard for us to get over that hump but we all hope to achieve that this season.”

She also has a lot of respect and admiration for her coach Mr. Ken Novak.

“I learn something new from Novak’s coaching everyday,” Murphy said. “I think what makes him such an amazing coach is that he is invested and cares about it as much as the players do and maybe even more.”

There are many upcoming opportunities to go see Murphy in action. The next match being Friday, September 14th, at Southwest High School, 4:00 PM.