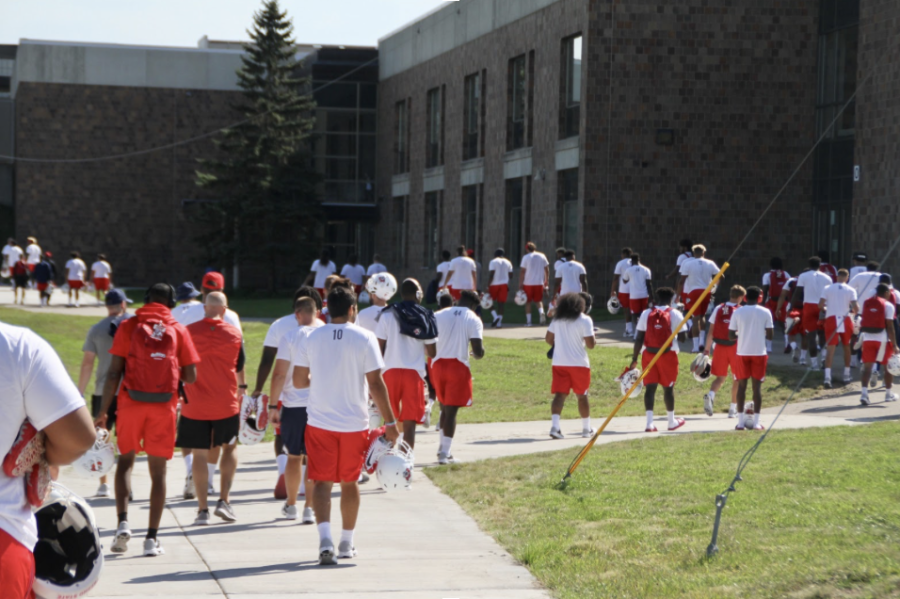 The Fresno State football team walks towards the HHS stadium. They take on the Gophers tomorrow.

Despite being the smallest school in the Lake Conference, and having a football team that went 1-7 last year, the Hopkins High Football team was host to a D1 football school, the Fresno State Bulldogs.

The Bulldogs practiced on the HHS football field on Friday before playing the Minnesota Golden Gophers on Saturday at TCF Bank Stadium.

“They called us about three weeks ago and I had no problem with letting them play,” said Dan Johnson, HHS athletic director. “We have had a couple of colleges and pro teams ask if they could practice at out field before.”

Back when Gary Andersen was the kicker of the Minnesota Vikings, he lived close to Hopkins and asked to kick at the HHS field for practice. He did this because the turf at HHS was similar to the Metrodome.

“Their hotel is close to the high school so they game us a call and it was pretty simple,” Johnson said. “We have the best facility in the Lake Conference so it would make sense to choose us.”

“I just found out about it and I think it’s really cool they chose us over Edina, Eden Prarie, Minnetonka, and Wayzata,” Martens said. “People under estimate us but we are coming up and our field is the best in the state.”

Fresno State plays the University of Minnesota tomorrow at 6:30 pm.