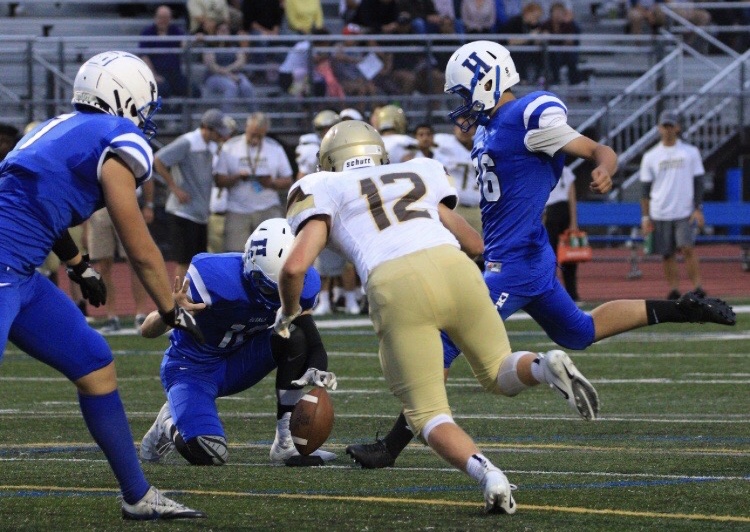 Sam Segelbaum, senior, kicks an extra point in the season opener. The Hopkins kicker made all three of his extra points in this game.

After over 10 years of playing organized soccer, Sam Segelbaum, senior, has become the starting kicker for the HHS Varsity football team. Segelbaum decided to make the switch to football because he would have played for the junior varsity soccer team this year.

Given the fact that the starting kicker for the Royals was senior Spanish exchange student, Andreu Arbona Gelabert, had to go back home to Spain, Segelbaum felt he could make the team.

“After going to Hopkins football games, being the kicker looked fun and easy, since I knew I had a big leg I felt I could do well in the position,” said Segelbaum.

The Royals were moved from the Lake Conference to the Blue Conference before the start of the 2017-’18 season.  After going 1-7 last season, the team looks to move past their lackluster year and do big things this year.

Now that it’s been over a decade of Segelbaum playing soccer, the change to football could have been a difficult process.

“The transition was hard and easy at the same time. It was hard because I wasn’t really close friends with a lot of the guys on the team and I had never kicked a football before so it took some learning,” Segelbaum said, “It was easy because even though I didn’t know a lot of kids, everyone was very encouraging and welcoming through the process.”

The Royals started off the season with a bang, defeating Apple Valley with a shutout 21-0 victory at the end of August.  Segelbaum started his season well going 3/3 on extra points in that game.

Now that the season is underway, Segelbaum has had the in-game kicking experience, and has his personal goals for the year in mind.

“My personal goals this year are to hopefully not miss any of my kicks and have the ball go farther than the end zone on a kick off,” said Segelbaum.