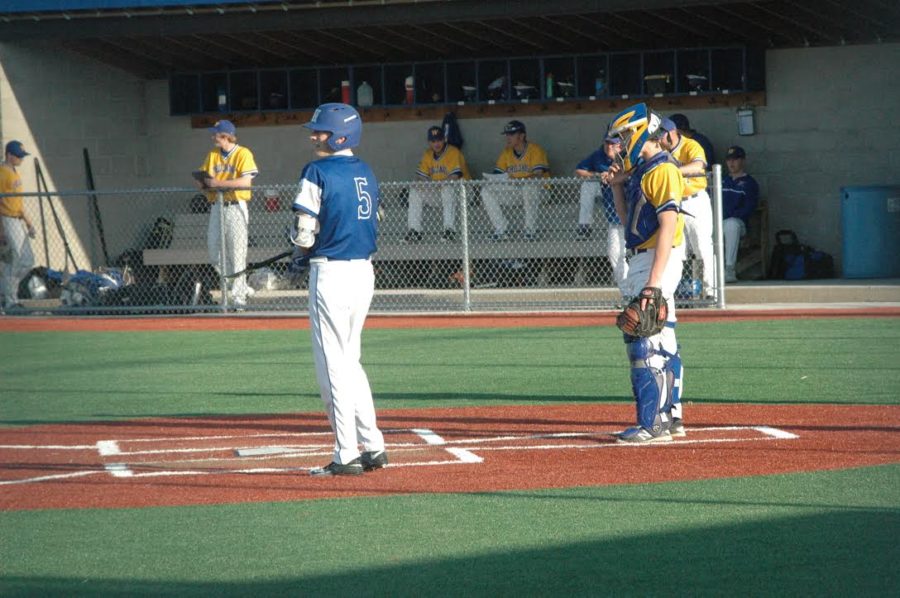 Kyle Chiriboga, senior, back away from home plate after taking ball. Chiriboga and the Royals are 9-6 and look to take down the Hornets in their second matchup against them this season.

Tomorrow, May 16, the Royals baseball team will play their fifth Lake Conference game of the season and their second, and final game, against the Edina Hornets.

The Royals faced the Hornets earlier in the season but fell 5-10. However, they have already matched their conference win total from last year when they went 2-6, this year they are 2-2. They have beaten the Eden Prairie Eagles and Wayzata Trojans.

Throughout this season, the Royals have gone on hot and cold streaks. They have gone on two three-game win streaks, but, they also had two separate occasions where they’ve lost back-to-back games. Even with the couple cold streaks, the Royals still sit three games above .500 with a 9-6 record.

The Royals have lost their past two games now and will look to end the losing streak today and not drop three games in a row for the first time this season. Today they face the Chanhassen Storm who are having a solid year and sit at 10-3.

It feels as though the season just started, but after tomorrow’s game, the Royals only have three games left and the final three games could be the hardest three game stretch of the season. They will play three conference games against the Eagles, Trojans and the Minnetonka Skippers.

Though the Trojans are under .500, it is still a conference game which always has more meaning than regular games. Both the Skippers and Eagles are well over .500 sitting at 13-2 and 10-5, respectively.