Op/Ed: NBA Rookie of the Year 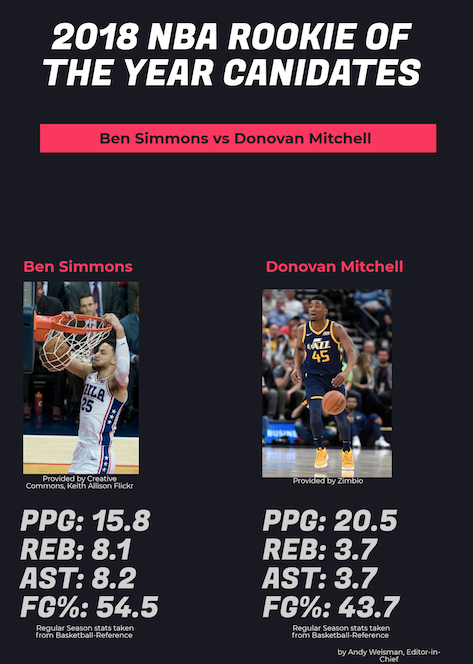 The 2017-18 NBA season is ending very soon. Each year there are a couple rookie players that stand out from the rest. This year, the debate on who should win rookie of the year has been a big controversy.

Ben Simmons, Philadelphia 76ers Point Guard, and Donovan Mitchell, Utah Jazz Shooting Guard, are the frontrunners to win rookie of the year. The award will be presented after this year’s playoffs conclude.

Simmons was drafted first overall in the 2016 NBA draft and was injured for the whole season. With Simmons being injured for the 2016-17 NBA season, he was not counted as a rookie last year because he did not play in a game.

Simmons played his first game in the NBA this season and was an instant star, being compared to Lebron James, Cleveland Cavaliers Small Forward. He put up stats that were almost unheard of for a rookie. Simmons recorded eight triple doubles which is the second most in NBA history by a rookie.

Mitchell was drafted by the the Denver Nuggets and was traded to the Utah Jazz in the 2017 NBA draft. He instantly became a leader for the Jazz.

Mitchell set the rookie record for most three point shots made in a season with 186. He also replaced Aaron Gordon, Orlando Magic Power Forward, in the NBA Slam Dunk Contest. Mitchell went onto win the contest, scoring 48/50 and 50/50 in the first round and 50/50 and 48/50 in the second round.

This has been one of the biggest disputes in the NBA for a long time and the winner will not be revealed until the end of the season.