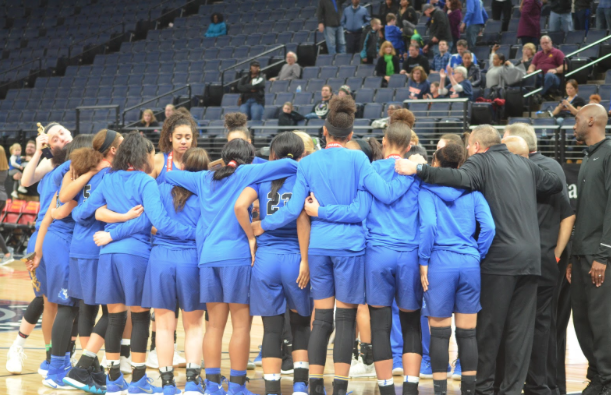 The Royals huddled around recapping their performance after falling to the Lightning in the State Championship. The final score was 63-68.

After two commanding victories in the opening rounds of the MSHSL state tournament, the second-seeded Hopkins Royals took on the one-seeded Eastview Lightning in what was a true championship fight.

Eastview has cooked themselves up quite the season. They have yet to lose a game this year with a flawless record of 31-0. The Lightning and Royals have met once previously in the regular season with Eastview coming out on top by a score of 66-56.

The Royals looked for revenge tonight. In the past four years, Hopkins has made an appearance in every state championship.

In the Lightning’s previous win, they prevailed over Lakeville North in a tight game. Andrea Abrams, senior, led the team in scoring with 16 points in the game.

Hopkins had an explosive start right off the tip with Paige Bueckers, sophomore, threading the needle to a wide open Raena Suggs, senior, for a layup.

Bueckers scored 14 of the Royal’s first 16 points, hitting a mixture of jump shots and layups. Bueckers executed extremely well in creating her own shot.

Eastview switched to a zone defense with 14:43 left in the first half to try and slow Bueckers down as man to man defense allowed her to beat her defender consistently.

Eastview struggled early with the defensive pressure of the Royals as they played full court pressure for the early minutes of the first half. The Lightning had many early turnovers which played right into the Royal’s plan of getting the ball out in transition whenever they could.

The Lightning got an offensive spark from Megan Walstad, senior, as she had eight points with 6:51 left in the first half. Walstad had some nifty moves to free her up down low in the post.

Hopkins got into early foul trouble as Amaya Battle, eighth grader, had three fouls in the early going. Eastview was also in the bonus with a little over five minutes left in the first half.

At the half, the Royals led the Lightning by a score of 33-30 in what was a back and forth first half.

Walstad led the Lightning in scoring as she had 11 points in the first half. She was a force to be reckoned with down low. Her teammates found her in good positions as she converted high percentage shots.

Bueckers looked possessed in the first half hitting nine of her 13 field goals. Bueckers led all scorers at the half with 23 points. She also scored or assisted on nearly 76 percent of all points scored for the Royals in the first half. The Royals as a whole shot 54 percent from the field.

A costly Royal turnover led to an and-one bucket by Macy Guebert, junior, to put the Lightning up 40-37 with 13:29 left in the last half.

These last 12 minutes were electric. Great basketball was played on both ends of the floor on the biggest stage.

The Lightning came right back as Mariah Alipate, senior, hit a layup and a three to put the Lightning back on top 54-49 with 6:41 left in the game.

Suggs gave hopkins some life when she hit a three pointer to cut the lead to three with five minutes remaining. Suggs, the next possession, got to the line and made on of two free throws to cut the lead further to one.

Fouls were key at the end of this one. With the Lightning in double bonus, Halstad knocked down two free throws to put the Lightning up six with under two minutes to play.

Chakolis came in clutch on defense forcing a jump ball giving us the ball back. Although the Royals didn’t convert, their defensive pressure caused another turnover as the Lighting got a 10 second violation. The score was 60-64 Lightning at the time with 1:08 to play.

Chakolis came up big again getting an offensive rebound with under a minute to play. She cut the lead down to one point.

Guebert was then fouled and eventually made two free throws to put the Lightning backup 63-66 with 27 seconds left.

Hopkins couldn’t convert on their last possession which led to Hopkins to foul. Emma Carpenter, junior, knocked down the daggers as the game was put away.

This capped off a historic season for the Eastview Lightning as they went 32-0.

The Royals fought till the end and stayed together. Regardless of the result, the Royals gathered as a team after the game and shared an emotional moment.

Bueckers led all scorers with 37 points while Eastview’s leading scorer was Walstad with 20.