Girls basketball defeats the Raiders and advances to the State Championship 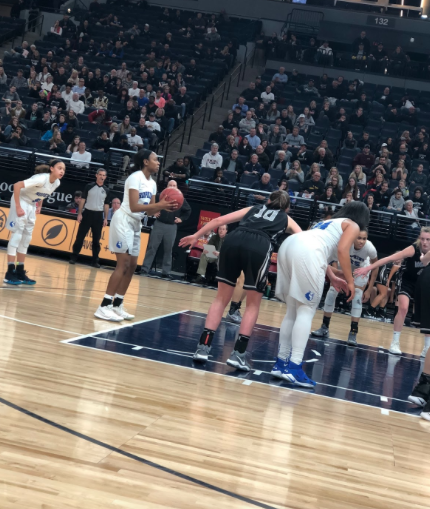 Raena Suggs, senior, lines up for two free throws in the Royal’s win against the Roseville Raiders. Suggs had six points in the win.

After a statement win against Forest Lake last night, the Royals took on the Roseville Raiders (23-7) in a well fought game from both teams.

Jada Hood, junior, played a key role for the Raiders as she put up 18 points and made key shots towards the end of the game. The Royals made her a focus in their defensive plan.

The Royals kept up their defensive pressure from yesterday as Roseville’s first possession was a turnover that led to a Raena Suggs, senior, transition layup. The Raiders had a tough time breaking this pressure in the early minutes.

The Raiders were forced to call two timeouts in the first six minutes of the game to try and regroup.

The Royals were successful in the early minutes at finishing in the paint. Ball movement was also key for the royals as they assisted on more than 75 percent of their buckets in the first half.

The Raiders changed up their defensive look with 10 minutes left in the first half as they switched up to a two-three zone to try and mess up the flow of the Royals offense. This didn’t fluster the Royals as they scored three straight possessions after the Raiders made the switch.

The Royals kept up their defensive pressure as they looked to their high pressured two-three zone. This forced some key turnovers towards the end of the half. They looked to double team the ball whenever they could.

The Raiders found some momentum towards the end of the first half as they cut the lead down to eight.

Nevertheless, the Royals stayed focused and kept the lead going into halftime as they lead 39-18 going into the half. Amaya Battle, eighth grader, fought hard for an offensive rebound and made a put-back as time expired.

The Royals swallowed the Raider’s offense up as they shot 33 percent from the field. Hood was held to zero points in the first half. Hood was a key part in the Royal’s defensive gameplan going into tonight.

It was tough to keep the Royals off the boards as they outrebounded the Raiders 23 to 11. The Royals were also plus eight in the offensive rebounds category.

The Royals came out of the half with the same aggressive mindset getting right back into their full court pressure. They caused some more early turnovers which got the Royals back into their transition game in which they have succeeded so well all season.

The Royals started out hot going on a 7-0 run coming out of the half.

Offensive rebounds kept on piling up for the Royals as good position in the paint led to easy put-backs.

Hood got hot midway through the second half as she scored or assisted on four straight possessions for the Raiders.

A weird scenario played out late in the game when Battle stayed at half court as the time just kept running. Eight minutes were left in the game as Roseville stayed back in their zone as Battle stayed patient. It took the Raiders more than two minutes to start playing defense again.

The Royals kept the throttle going the whole second half as they cruised to a 61-34 victory. Paige Bueckers, sophomore, led all scorers with 21 points. Bueckers was electric on both sides of the floor.

The Royals are back in action for the state title this Saturday at Target Center against the one seeded Eastview Lightning.