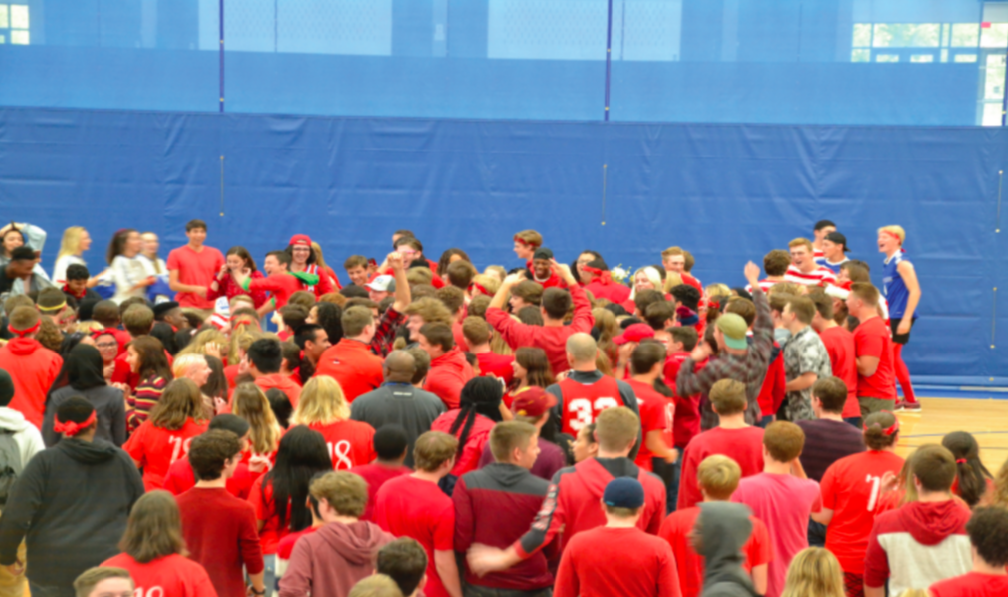 Upon dismissal from the fall Pepfest on Oct. 6, the senior class stampedes the basketball courts as per tradition. This year, the seniors’ stampede and aftermath prompted administration to seek changes in the culture of the student body at HHS. (Ati Hernke)

Upon dismissal from the fall Pepfest on Oct. 6, the senior class stampedes the basketball courts as per tradition. This year, the seniors’ stampede and aftermath prompted administration to seek changes in the culture of the student body at HHS.

Chris Chiriboga, senior, looked behind him and saw a sea of red approaching.

He began to run as the wave pushed him along— down, down, down, until he landed on the court. This sea of red was, in reality, a sea of seniors.

On Oct. 6, Student Council held the annual fall Pepfest ending a week of Homecoming celebrations. But with this Pepfest came the annual revival of the Senior Class’ tradition to stampede the court during students’ dismissal back to class.

“Nothing really went through my head; it was just a crowd momentum doing it. It was just like a herd of sheep, I guess. I wasn’t really thinking too much,” Chiriboga said. 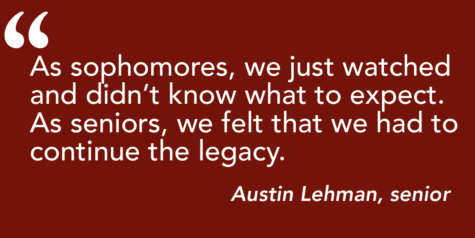 Austin Lehman, senior, had seen the stampede ever since his sophomore year, and as a senior, he understood the class’ sense of duty to stampede.

“As a sophomore, we just kinda watched and didn’t know what to expect, and then it happened. The same as junior year. So I guess we were just like, ‘This is a thing here.’ As a senior we felt that we had to continue the legacy,” Lehman said.

After experiencing the seniors’ stampede for the second year, Mr. Doug Bullinger, principal, expressed frustration due to the serious safety issues the stampede creates.

“Last year was my first year seeing it, and I heard that some of that had happened in the past, but I was a little bit taken aback last fall about it,” Bullinger said. “This year I was disappointed to see it happen again, despite the fact that we had an increased adult presence in the front, thinking that might dissuade people, but it did not.”

Reflecting on this year’s stampede, Bullinger noted that the force of seniors as a collective group makes intervention nearly impossible.

“Talking to our [Student Resource Officer], I asked him afterwards from a police perspective ‘What do you do when you have that many students pushing forward?’ And he said, ‘You just let them through, because if you were to hold people back or continue to push, then you have people getting trampled, so you have to let the floodgates go.’ So you can kind of hope that a presence helps to dissuade but at the same time if students decide to do it, they decide to do it,” Bullinger said.

After the initial stampede in the Lindbergh center, many students rushed to bathrooms throughout the school, causing more harm to students, teachers, and school property. This year, bathroom sinks and counters were destroyed, leaving the facility closed for days after.

“There was like 80 people crammed into a bathroom. I don’t understand it personally,” Bullinger said. “But, I think it’s just a mob mentality, you just get swept up in the action and energy and you’re like, ‘This seems right; everybody else is doing it. I’ll just join in on this,’ But it just takes a few people to say, ‘Nah, I think we should stop this.’”

In a Student Council meeting on Oct. 11, Ms. Kathleen Miller, Administration Secretary and co-adviser of HHS Student Council, spoke of the Senior Class’ responsibility in the damage caused after Pepfest.

“Students destroyed the countertops in the boys’ bathroom, which is about a $2,000 expense. Students jumped off the ledges in the Mall. Dangerous. Three students got hurt. It was bad. It was bad,” Miller said. “And when viewing the cameras, it was primarily led by seniors. And the seniors during the day were chanting ‘Eff the juniors.’  Totally unacceptable behavior. And it’s just not a good example of leadership with this year’s group of seniors.”

Names with an asterisk* have been changed to protect the anonymity of the student so they could speak freely of their roles in the events discussed.

Midnight struck on Aug. 28, and with toilet paper, red glitter and red streamers in hand, Sophia Smith*, senior, and her friends set out for the night.

Stopping at their pre-assigned addresses of sophomore girls, Smith and her friends vandalized each house with their supplies and left messages on poster board and sidewalk chalk to “welcome” the sophomores to HHS the night before Sophomore Orientation. At houses all over the Hopkins area, groups of senior girls were doing the same thing— continuing the years-long senior tradition.

Before she left for the night, Smith’s parents warned her of the legal implications that this tradition had. The fear of such consequences remained in Smith’s mind as she proceeded with her friends.

“My parents scared the actual crap out of me before I even did it. They told me, ‘If you get in trouble, know this is a crime.’ You’re not necessarily vandalizing houses, but it could potentially go that far. In the student handbook this is considered a form of harassment,” Smith said.

As she cast toilet paper over trees, Smith thought back to her own sophomore year. 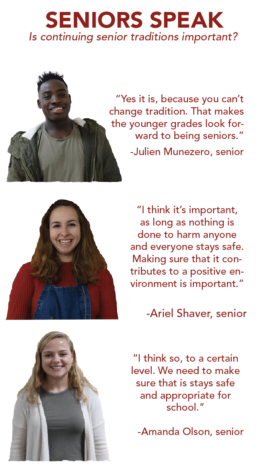 “I didn’t get TP’d personally as a sophomore, and I felt like I missed out on the experience, and I wanted to give that to the sophomores,” Smith said.

At another house miles away, Emma Jones,* senior, was having second thoughts about participating in the tradition.

“I thought it was kind of stupid. I didn’t really understand why we were doing it, but I just kind of went along with it for the first time and then decided to break off,” Jones said.

Though Jones stopped, many groups of seniors continued through the night. As the sun rose on the morning of Sophomore Orientation, sophomores and their families awoke to their trashed yards.

While some sophomores enjoyed the prank, parents and administrators expressed frustration and concern with the tradition. With pictures of vandalized homes being posted by parents on social media, many seniors began to see the negative consequences of their tradition.

“In the morning, one of the posters got posted on Facebook. It was one of our group’s posters, so we got kind of freaked out that something bad would happen, and we started regretting it a little,” Jones said.

As the school year began, many seniors and sophomores began to forget about the events of the previous week. When August arrives, however, many juniors will prepare to deface the incoming sophomores’ houses, continuing the cycle. In two years, the sophomores who were just vandalized will be the ones to continue the tradition.

“I think I would do it as a senior to keep the tradition alive…but I know there were some legal issues and offensive things and I wouldn’t want to do anything to hurt anybody,” said Sally Reed, junior. “I actually thought [getting TP’d] was super cool because I felt special that the seniors knew me well enough to be comfortable to TP me and trash my yard and put pumpkin everywhere. “

Bullinger believes that there are more inclusive and positive ways for seniors to initiate soph0mores into HHS each year.

“It’s not an attractive tradition, and again maybe it goes back to not wanting to be the class that stops this tradition, but I think you can still change the tradition,” Bullinger said. “You can change what it means to welcome or indoctrinate the sophomores into the school without being emotionally or physically harmful.”

After vandalized houses were cleaned up and students arrived back in class after Pepfest, administration looked to the causes of these traditions in order to mitigate their effects.

“We’ve got to take some responsibility for setting the tone of the Pepfest when it comes to getting everybody amped up. It just felt crazy in there. Kids were very amped up,” Miller said.

Bullinger said that the timing and structure of Pepfest also causes students to channel their energy negatively.

“Thinking about the conditions of Pepfest, we’ve got everybody kind of hyped up after 45 minutes together, and all of a sudden we’re like, ‘Ok, now go back to class and sit down and learn.’ Nobody’s really in that mindset at that point, so I think that’s part of why this happens,” Bullinger said.

As a result, future Pepfests will undergo major changes. Administration is considering shortening Pepfests, moving them to fourth block, and ending them with dismissal by Bullinger. Bullinger also believes that connecting with juniors and sophomores can bring this tradition to an end.

“My hope is to connect with students about deciding that we can do this a different way. We can come up with a new tradition or whatever that might be that’s still fun and still a senior tradition but is not going to put anybody in danger,” Bullinger said.

As far as the senior girls’ vandalism, Bullinger said that administrative action is difficult due to the tradition’s timing.

“It’s tough to be proactive in the summertime; it’s obviously a lot easier to be proactive during the school year. That’s why we have class meetings, and that’s why I was so disappointed to see some of the behavior we did during Homecoming week,” Bullinger said. “In the summertime, you’re totally stuck being reactive to it all.” 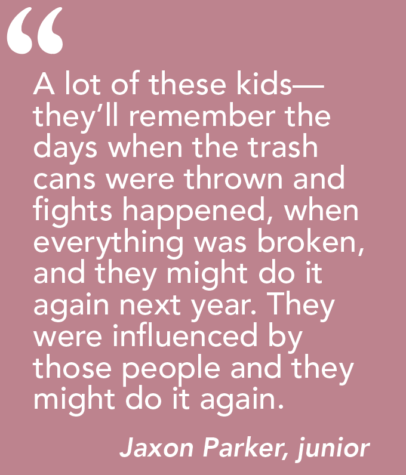 In another meeting on Oct. 25, Student Council proposed ways to alleviate the negative environment events such as the Pepfest caused. Short-term solutions proposed included locking the bathroom doors before Pepfest and increasing a staff presence among the student sections. Many Student Council members also suggested changes in student culture, including an all-school service project and showcasing student achievements.

During the meeting, Student Council representative Jaxon Parker, junior, said that long-term solutions will be necessary to truly effectuate change in the student body.

“We have to remember student culture cannot change overnight,” Parker said. “And if we want something— a plan of unity and projects and all of these great things to happen we have to realize that it’s probably not going to happen this year or next year. It has to be a long-term plan that we know will work and will have a positive effect on the students.”

Bullinger hopes that future seniors will have the maturity to end the tradition and its consequences. He said that HHS’ unique 10-12 grade structure can also allow for impactful change to be made more easily, as students are exposed to these traditions for a shorter duration of their high school careers.

Nevertheless, Smith believes that the social pressure to continue these traditions will allow for them to continue forever.

“Ultimately, if you can persuade a whole entire class, I applaud you. But as of right now, there’s always going to be that little group within a large group that is going to want to rebel against someone else,” Smith said.