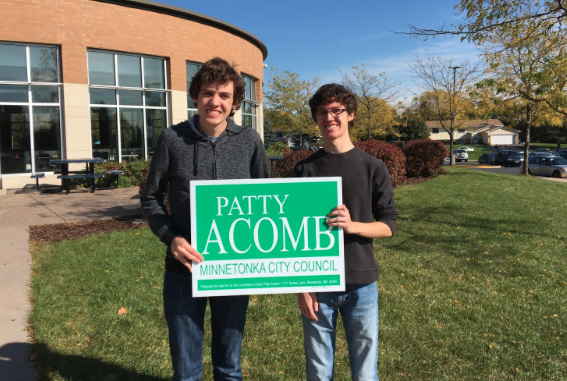 Left to right: Charlie and Jack Acomb. Posed outside of HHS with Patty Acomb sign.

Campaign yard signs are as much of a staple of autumn as the falling temperatures and changing leaves.

For Jack Acomb, senior and Charlie Acomb, sophomore, these signs have an air of familiarity.

Their mother Patty Acomb is running for re-election to her second term as a Minnetonka City Council member. Patty is the former vice-chair of the Minnetonka Park Board, and ran for city council five years ago when a spot opened.

“I’ve lived in this city a long time, I know what people would like to see happen,” Patty said.

In her time as a councilwoman Patty lead efforts to increase the solar energy presence in Minnetonka, as well as advocating for the expansion of trails throughout the city.

He has been involved and invested in his mother’s campaign, personally designing her website, campaigning door to door, and helping distribute yard signs.

Jack shares a love of government with his mother, as he is currently the student representative on the Minnetonka Park Board. He plans on pursuing a career path which he can stay involved in politics continuing into the future.

Both younger Acombs take a lot of inspiration from her mother who believes heavily in civic involvement in politics.

“People in the city have a lot more influence than they think they do,” Patty said.