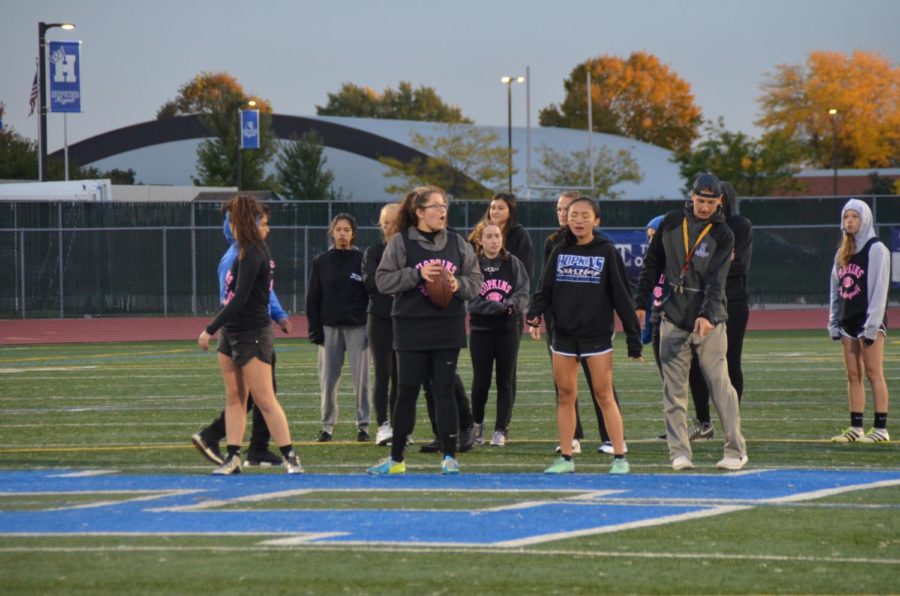 Senior ladies warm up at Powder Puff. The Seniors won 12-0.

As homecoming week came to a close this year, the spotlight moved away from school spirit and towards class spirit, specifically the junior and senior girls as they stepped under the lights for the Powderpuff football game on Oct. 9 at 6pm.

Powderpuff is a game where the junior girls face the senior girls in a touch football game. This year, 80 girls signed up to participate in the game.

“I feel as if the juniors played well. We could have been more organized and had more thought-out plans,” said DeMeshè Baker, junior.

On this cold fall night, with the temperature just under 50 degrees, the only thing keeping players such as Sophia Haley, senior, warm was the team dynamic.

“The environment was really fun; all of the senior girls came together, despite friend groups, with the goal of winning,” Haley said.

For some juniors, including Baker, it was the heat of the competition over their older classmates and the fire they had to beat the seniors.

“The environment was pretty hectic and crazy, but overall thrill seeking,” said Baker.“My favorite part was playing offensive and running the ball. It was extremely fun we got to laugh, cry and yell.”

Just like during the actual homecoming game, listening to coaches was key, with the seniors taking home the 12-0 win. Their success was boosted from good coaching, but even more from excited players.

“The girls played better than I had originally thought, which was fun to see. Strongest players were those who actually listened and did what the coaches told them. Sophia Haley, Maddie Peterson, and Natalie DenHartog were some of those players. Winning is always fun,” said David Sheldon, senior.