Digging Through the Crates: Kid Cudi’s Man on the Moon 2 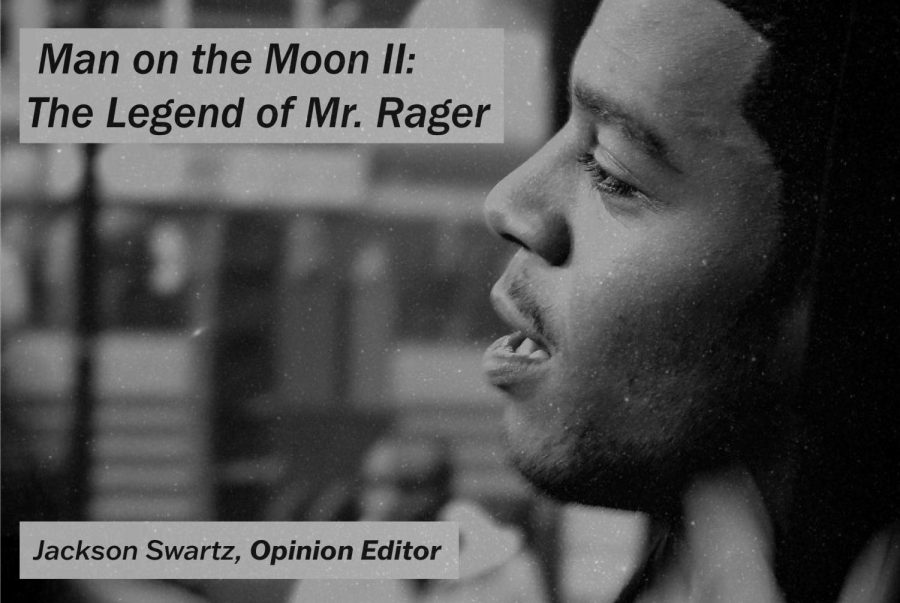 In the genre of Hip Hop, Kid Cudi’s often credited for walking the path less chosen.

Lending his influence to fellow genre blurrers such as Kanye West and Travis Scott, Cudi landed himself with the stamp of genre pioneer, more renowned for his influence than work itself.

Listening to Cudi’s music, it isn’t hard to see why he landed himself in this predicament. Much like the scorching guitar riffs of Chuck Berry who laid the groundwork for modern rock, it isn’t something I find myself tuning in to. Cudi’s music always felt held back by the aesthetics of its own era. Credited in the world of music, yet rarely mentioned outside it. Cudi was the critical darling I just didn’t find charming.

That was until a cool autumn night when I decided to go for a drive with “Man On The Moon II: The Legend Of Mr. Rager,” the sequel to Cudi’s critically acclaimed debut. Unlike its predecessor, “MOTM2” is a dry, gloomy visit into the MC’S subconscious, and he didn’t clean for company.

Where Cudi’s first album was a lucid dream, packed full of unattainable fantasies and high hopes, its sequel feels more attune to the confused madness associated with that of a fever dream. Tracks blur together in an artistic hodgepodge, showing glimpses of a world not fully realized until the album’s conclusion.

Cudi’s clearly in a dark place here, loosely dropping lines on addiction and depression with ease.  Yet, instead of painting a full picture of his pain, Cudi lets the music do most of the talking. Psychedelic production swirls the listener through a vacuum of emotions, rearranging what most call sadness and happiness into some sort of suicide cocktail, and ultimately spitting them back out where they started.

Through the walls of this album, one could find hope, joy, loneliness, and euphoria staring them in the face. Like a dinner party where everyone is trying to get a word in, Cudi makes these voices indistinguishable from each other, hiding depression behind the atmospheric production of “Mojo So Dope,” or transferring his addiction into a cool guy persona on tracks like “Don’t Play This Song.”

Often, Cudi will let one of the many emotions he elicits through song pull you off to the corner of the party, for a chat one-on-one. “Erase Me” is a straightforward breakup record, balancing grunge esque guitars with a guest verse from Kanye West. While  “Ghost” is a loud cry of a guy down on his luck, where Cudi manages to balance lyrical skill with a soulful croon.

Production-wise the album reaches a peak most don’t dare to climb. The album’s cinematic dystopian feel places Cudi’s instrumentals somewhere between Kanye West’s “My Beautiful Dark Twisted Fantasy” and the jazz sensibilities of A Tribe Called Quest’s “Low End Theory.” With bombarding drums and dry piano, the album brings an indie sensibility to a time when artists like B.o.B were climbing the charts.

Overall, MOTM2 accomplishes something that up to its time was a rarity in hip hop. Without question Cudi’s rapping sure, but with an elegant flow and all-around demeanor, Cudi’s words were singing for him. The album showed the mainstream media that rap was capable of portraying the same emotional depth as pop or rock music.