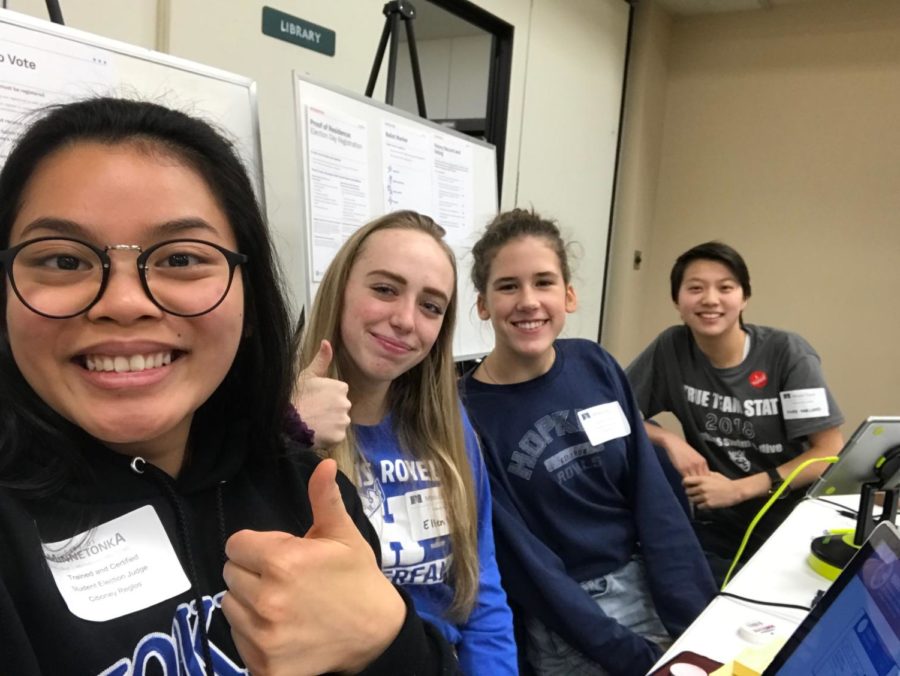 From the countless political ads to the chaotic voting atmosphere, a silver lining in all this election madness would be how students at HHS got involved in the voting process.

On Nov. 2, 2018 a variety of students were excused from HHS for the day so they could perform the civic duty of being an election judge.

An election judge is a temporary employee paid anywhere from 10 to 12 dollars an hour, that serves as local election officials. They are advised to handle and organize all aspects of voting at their assigned polling place. They help verify voter eligibility, assist with registration and distribute ballots.

Mac Leydon, a member of city hall, was responsible for distributing election judges among different polling locations. Leydon encouraged students to represent their schools and help manage the voting process for their district.

“We had a great turnout for student volunteers. It’s nice to see that both students and adults assisted in managing the voting process and are eager to get involved,” Leydon said.

Government teachers at HHS recommended that students should apply to assist with the polling of their respective district. Payton Meuwissen, senior, was one student who jumped on the opportunity.

“I was hesitant on becoming an election judge after my AP Government teacher encouraged my friends and I to do it. I thought it could be a fun, paid experience,” Meuwissen said.

Her involvement in AP Government did influence her ultimate decision. Meuwissen enjoys discussions of politics and local elections within her class, so becoming involved in the process was the natural next step.

For Meuwissen, the day started early, students were in polling places at six in the morning setting up polling booths and forming lines. From seven to eight the voting madness was at its peak. And while the polls closed at eight, Meuwissen didn’t leave her building until two in the afternoon.

“I think being a student election judge was a great way to give back to our community and contribute to the election process. I currently don’t see myself having a future in politics, but I will stay political throughout my life. You don’t need to be a politician if you want to help your community,” Meuwissen said.

Luke Polyak, senior, was another student who served as an election judge. He didn’t expect a lot coming into the experience, but he walked away with a positive outlook on the election process.

“I’ve always been interested in the political system. I thought this was a good way to participate even though I couldn’t vote,” Polyak said.

Polyak has been learning about the election process in class, and he thought it would be cool to actually “give back” to his community.

“It was interesting to see how everything was specifically set up by our local government, and it was nice to know that nothing shady was going on with the polls. All the other election judges were elderly people, and they were thrilled to see high school students involved in the voting process,” Polyak said.

As a senior, Polyak is the next generation of young adults that are becoming voters and that are going to integrate into the outside world. Volunteering as an election judge was a step in the right direction.

“By becoming an election judge I allowed the community in Minnetonka to exercise their right to vote. I may have just helped in setting up polling booths and directing people on where to go, but it’s still important that our generation gets involved with the a world beyond HHS,” Polyak said.