Protesting during the National Anthem hits students at HHS 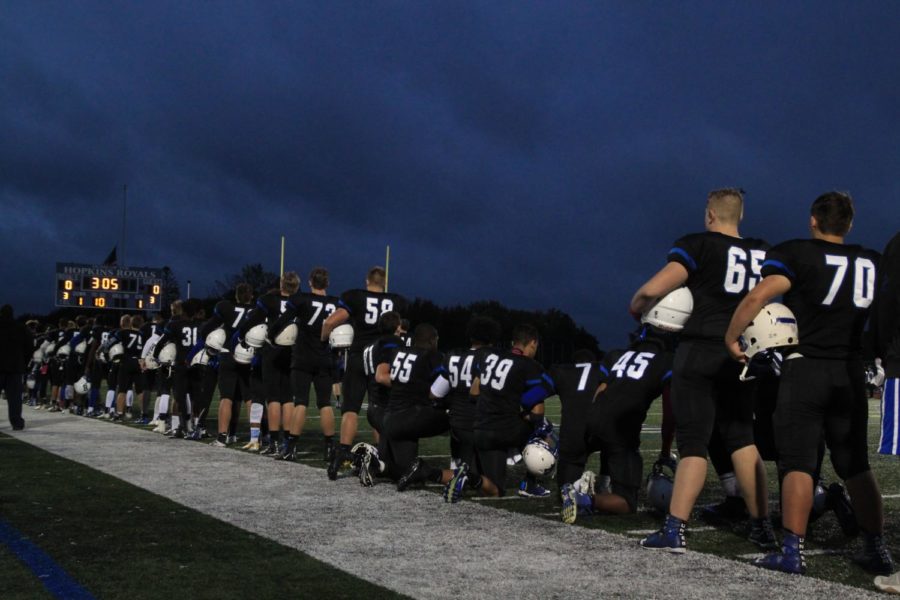 Some football players joined together and knelt during the National Anthem. The Royals won this game 21-19.

Even if you have not followed politics or current events in recent months, it is easy to see within our school and community through discussions in classes that the political climate is divisive and polarizing.

This divide was intensified by President Trump’s comments two weeks ago on the NFL and some players choosing to kneel or sit for the national anthem.

“If a player wants the privilege of making millions of dollars in the NFL, or other leagues, he or she should not be allowed to disrespect….our Great American Flag (or Country) and should stand for the National Anthem. If not, YOU’RE FIRED. Find something else to do!” tweeted Donald Trump.

These brash statements sent waves through our country, eventually being felt within our school, as debates sparked throughout the student population. The president was alluding to kneeling protests during the national anthem in his tweets.

The target of many of these protests are police brutality, such as the killing of St. Paul native Phillando Castille, as well as systemic institutionalized racist policies. This method has been an increasingly popular method of protest in recent years.

This practice has even been adopted by a handful of Hopkins Football team members.

“I personally plan on participating in kneeling during the homecoming game,” said X’zarion Hill, senior.

Hill says he will join several players in the homecoming game, including captain Paul Madison, senior. Madison has consistently protested during national anthem this season.

Beyond the field, students are protesting in other ways. Such as during this past Thursday’s USA spirit day, when several students chose to wear Black Lives Matter shirts, dashikis, or simply blackout in protest.

One student who participated in this protest by wearing a BLM t-shirt was Safiyo Mohamud, senior.

“I don’t think people understand America doesn’t like me,” Mohamud said. “How am I supposed to support a country that doesn’t help me nor respect me, so that’s why I wore that shirt.”

There has been backlash to these protests both at the national level, and even here within our school. Some see the kneeling to be an affront to our nation and to our military, as many view the flag as the symbol representing America and by proxy our armed forces.

“I think kneeling for the national anthem is disrespectful to servicemen, I feel there are other ways we can peacefully protest,” said Thomas Auth, senior

I believe, in actuality by protesting these players and students are showing the utmost respect for their country. They seek to improve upon and right injustices that are seen throughout our nation.

Apathy to the injustices we witness far too often, would discredit the enumerable sacrifices our servicemen and women make to protect values which we hold so dear.